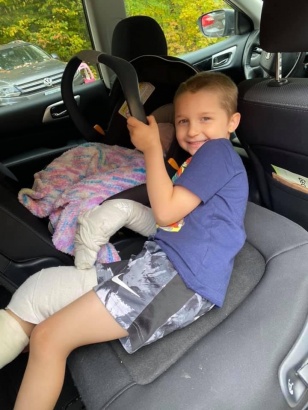 Tragedy struck when a Verani School of Real Estate student’s son George, was run over by a lawn mower. At only 5 years old, George had to undergo extensive surgeries to the right side of his body - although suffering a variety of injuries, he is very lucky to be alive. Not only did George’s mom have to deal with the horrors of such an accident, but she was also 40 weeks pregnant and on maternity leave with little income.

A local Manchester, NH family was also met with devastation when Wesley Belisle, age 4, was swept out to sea while on a family vacation in the Outer Banks. In honor of his memory, the Belisle family established a charity in Wesley's name, Wesley's Way Foundation. The goal of the foundation is to raise enough money to build a community playground in Manchester in Wesley's memory by April 2021.

In response, Verani Agents and staff throughout the company showed their support and compassion by making donations to George and to the Wesley’s Way Foundation. In just a matter of days the agents and staff raised over $4,000, which was matched by a VeraniCARES donation.

Hard times are inevitable, but with tenacity, trust and generosity we can support one another to lighten the burden of the challenges we face. The Verani agents and staff truly showed what being part of the Verani Family means.

Verani Realty has always had a commitment and dedication to helping better the community. In late 2015 VeraniCARES was established and it has quickly become a big part of the company’s identity. Since inception, VeraniCARES has donated over $275,000 to more than 50 local organizations. Agents and staff alike give their time and energy by participating in the many VeraniCARES volunteering and fundraising events which take place throughout the year. Many Verani Realty agents also donate a portion of their commission to VeraniCARES which is matched by the company.

©2021 MLS Property Information Network, Inc; The information in this listing was gathered from third party resources including the seller and public records. MLS Property Information Network, Inc. and its subscribers disclaim any and all representations or warranties as to the accuracy of this information.
Copyright 2021 New England Real Estate Network, Inc. All rights reserved. This information is deemed reliable, but not guaranteed. The data relating to real estate displayed on this Site comes in part from the IDX Program of NEREN. The information being provided is for consumers’ personal, non-commercial use and may not be used for any purpose other than to identify prospective properties consumers may be interested in purchasing. Data last updated January 18, 2021.

Listing data is derived in whole or in part from the Maine IDX and is for consumers' personal, noncommercial use only. Dimensions are approximate and not guaranteed. All data should be independently verified. © 2021 Maine Real Estate Information System, Inc. All Rights Reserved