Spotlight City: Why We Love the Homes in Alton, NH 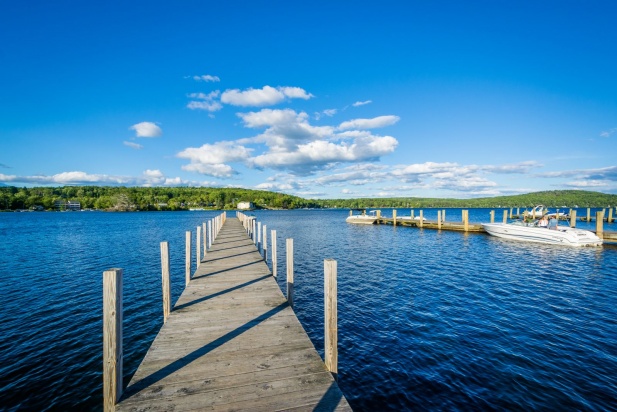 Situated in Belknap County, Alton, New Hampshire is a town in the Lakes Region next to Lake Winnipesaukee. Sprawled out among 82 square miles, Alton, NH is made up of both land and water area, about 63 square miles makes up the land area and 19 square miles is water. Just over 5,300 people call Alton home but there is an influx in population in the summer months as it is a hot spot for vacationers.

Settled in 1770 by farmers, Alton was originally named “New Durham Gore” due to its rocky upland areas or “gores.”. The town was divided with farmers in the highland areas while the merchants filled the lowlands. As history states, it was the merchants that convinced the farmers to incorporate. So in 1796, the town was incorporated and named Alton, after a small market town in Hampshire, England.

Alton is located at the southernmost end of Lake Winnipesaukee, with a 4-mile-long inlet known as Alton Bay. With a small village occupying the southern tip of the bay, it’s become a popular spot among locals and tourists alike. There are two very popular hiking mountains that reside in Alton, one being Mount Major and the other is Straightback Mountain. Straightback Mountain also holds the highest point in Alton at it’s north peak, capping out at 1,910 ft. Both mountains are a part of the Belknap Mountains range.

The homes in Alton, NH range in both size and style to fit the differing needs of its residents. Here you can find lake homes for sale, situated on the shoreline of Lake Winnipesaukee for the buyer trying to relax and recharge, larger single family homes closer to town for growing families, and condos and townhomes for those just starting out or trying to downsize. No matter what you’re in the market for, Alton, NH can find what you’re looking for.

If you’re searching for your perfect home in Alton, NH call us today, your trusted and knowledgeable Verani Realty REALTORS®. You can also search for Alton, NH homes real estate for sale online at Verani.com